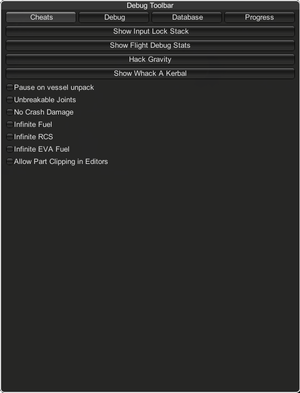 The debug toolbar open with the tab “Cheats”

The Debug Toolbar is a window designed for testing and debugging purposes. It can however also be used by the average player to ease gameplay, cheat or “goof off”.

With Mod+F12 the toolbar can be opened. It has four sections: Cheats, Debug, Database and Progress.

This section contains multiple checkboxes and buttons used to ease gameplay or debugging in cheaty ways.

These options are available at any time, however they may not always have an effect.

Only available during flight

These options are only shown during a flight.

Setting all these to max will destroy anything and spamming them will create lag and possibly crash the game. It can be used for testing the strength of a vessel.

To access, when on the cheats menu, holding Mod+F12 for 5 seconds will bring up some extra options inside the current cheat menu (This works in the KSP menu (where the player can access the buildings)). These options can be used to give funds, science, reputation, etc.

With version 0.24 the Debug Toolbar gets a new tab Gameplay Tweaks. With the options there it is possible to disable features which decrease the difficulty and were available before. Those features include stock craft in career mode, respawning of lost crew member, reverting, quicksaves and quickloads.

It is also possible to ignore agency mindsets on contracts.[1]