Gyro Kraken is when a spacecraft will spin around and vibrate so intensely that the spacecraft will be obliterated. The rate of spinning is so extreme that it is impossible to be replicated manually. 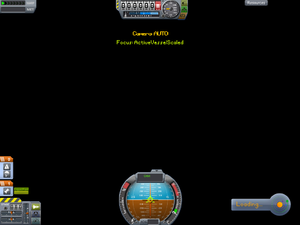 The game appears to focus on "ActiveVesselScaled", with the background being either black or white emptiness. The altimeter stays at zero, you cannot switch to map view, and the GUI is bugged. For example, lets say you try to click on the Docking controls at the bottom left of the screen. The game would then continuously show the animation of switching from Staging to Docking. You cannot leave to the Space Center through the Escape key. The only way to get rid of the screen is to exit through the desktop and reload KSP.

This type of Kraken will not affect your save files or harm anything else. In the Tracking Station, your craft will be back at its last quicksave point.