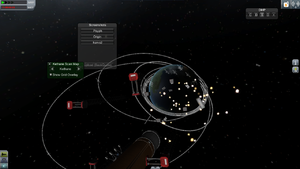 Appears in 0.24 only in the map screen when switching directly to it the moment you get on the launch pad. The vessel will be destroyed and blasted through your map screen as you stand by, helpless to say a word. This is an 'Ultra-rare' Kraken and has not been able to be reproduced.

Bonus: Some parts will still have physics and will fly around the background behind planets, others will freeze in time with explosions and all.