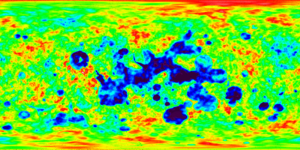 Duna has several craters, but they appear quite eroded, presumably from wind.

Several maria (large regions of dark soil) are at exactly 0 meters altitude (deprecated). Their flatness and low altitude allow for more aerobraking and make them easy but boring landing locations. These may have been lakes when the planet may have had liquid on its surface in the past. 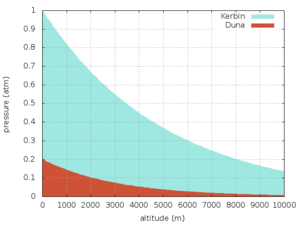 A comparison of the atmospheres of Duna and Kerbin 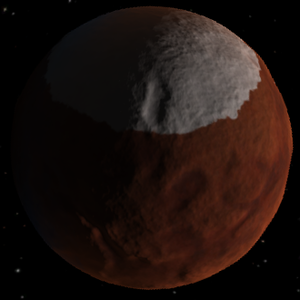 Duna's atmosphere begins at 41,446 m. It is only 20% as dense as Kerbin's at sea level altitude and is even less dense relative to Kerbin at higher altitudes. At Duna's highest peak, atmospheric density is only 21% of that at sea level. For comparison, on Kerbin, the atmosphere at the highest peaks is 45% as thick as at sea level. This low density will cause parachutes to semi-deploy much lower, just over 10 km for the Mk25 Parachute, and just under 9 km for all the other parachutes.

In comparison is the atmosphere the thinnest of all bodies with an atmosphere. Even Jool's moon Laythe has a more dense and higher atmosphere. The atmosphere appears to have a reddish or brownish tone itself. On the poles the illuminated atmosphere is coloured although the surface is white.

Aerobraking can save fuel by reducing orbital and surface velocity greatly. An aerobraking maneuver should maximize time spent in the atmosphere by entering at a shallow angle and aiming for a landing location in a low-lying area. One estimate for a good aerobraking height is 13,000 meters, which will then allow a relatively low delta-V burn at the apoapsis to create a stable orbit safely within Ike's reign of chaos.

Like all atmospheres in the game, Duna's atmosphere fades exponentially with increasing altitude (with a scale height of 3000 m). In general, the atmospheric pressure on Duna at an altitude expressed in meters is:[1]

Although parachutes will deploy on Duna, the atmosphere is so thin that they are usually unable to slow a craft to a safe landing velocity and must be assisted with engines. 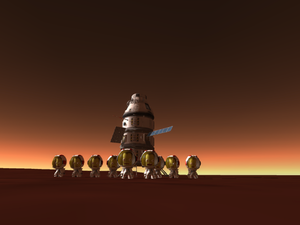 A nine Kerbal colony on Duna

An ascent to Low Duna Orbit from the surface typically requires around 1500 to 2000 m/s in Delta-V to reach a 42 km altitude traveling at roughly 950 m/s.

The following table gives terminal velocities at different Duna altitudes, which also the velocities at which a ship should travel for a fuel-optimal ascent from Duna, given the game's model of atmospheric drag.[2]

Also known as the red dot that you can see if you squint really hard, Duna has long been a wonder to Kerbalkind. The planet has been held in much awe, due to its striking red color and stark contrast to the color green.