The EAS-4 Strut Connector (frequently referred as "space tape") is a part that allows linking two parts together, for greater structural strength and stability. Strut links are much more rigid than normal part connections, dramatically reducing wobble. Currently, it is a physicsless part, meaning its mass and drag are added to the parent part.

Strut Connectors require two steps for placement on a craft. After placing one end of the strut, click somewhere else in range to place the other end. Once both ends are in place, the strut is created. When on the second step, pressing the ⌦ Delete or ⎋ Esc key will cancel placement.

Struts are an excellent way to repel the Deep Space Kraken. 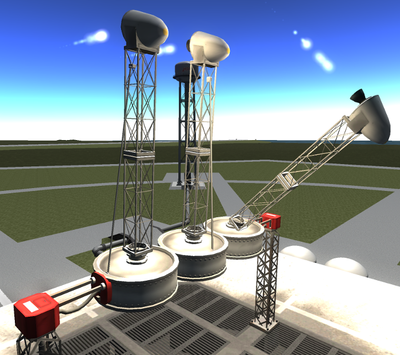 Struts don't behave like in the real world, instead forming a rigid joint between the parts connected, regardless of the geometry of the connection itself.

Struts can be placed EVA Construction Mode, even between docked ships that were launched seperately. This is helpful for increasing the stability of modular space stations and bases.

There is a bug that causes some struts built in EVA construction mode to disconnect after saving and reloading the game. This happens if the second end of the strut is placed on a part that comes from a different launch than the strut. The two ends of struts between separately launched vessels must therefore be placed in the correct order.

As of version 1.10 this part has two variants that can be switched in the editor.