Difference between revisions of "Electric light" 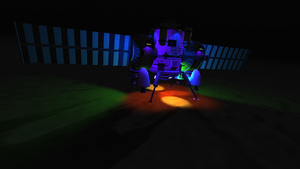 A light is a part that uses electricity or electric charge to shine a light. They can be used to provide visibility while landing at night or in a shaded area, and also to illuminate the craft itself. Electric lights are also useful for illuminating a rendez-vous target, such as a space station, if the vehicle is expecting to mate with a docking port that is in shade. For tidally locked moons like Mun, Vall or Ike, overnight landing missions are recommended to have any lights accompanied by large battery banks, or an RTG, as one night can be very long.

Currently, there are three major light sources. The Illuminator Mk1 and Illuminator Mk2 are the only dedicated light sources available. The Small Gear Bay also holds a light source which can be toggled. The Telus-LV Bay Mobility Enhancer also has a small electric light, though its light is too weak to illuminate anything other than its self, and can't be switched off. Parts with crew capacity introduced or updated since 0.90 have lighted windows, which is accomplished with alternate textures, which means that they do not light up the ambient area.

With version 1.0.5, all dedicated lights, and the LY-10 Small Landing Gear can have their colors changed in the VAB and SPH using tweakables. It is possible to change all three RGB color channels independently to produce nearly any color of light.

In version 1.0.5 the overhauled and new jet engines with an afterburner or plume effect light up the area around them.