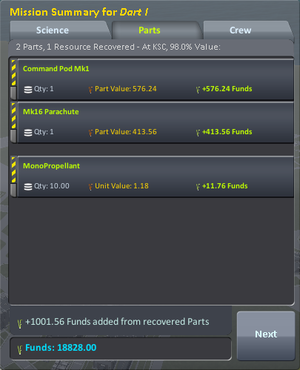 The information for a recovery of a command pod and parachute

) were introduced in version 0.24 and function as the game's budget, limiting the size and complexity of the vehicles that may be constructed at any given time and degree of progress through the game. The unit is not known and the symbol does not resemble any monetary unit used in real life, but when upgrading buildings a £ symbol appears in front of the amount.

Funds only apply to career mode; construction is unlimited in sandbox and science mode.

Funds are earned through accepting and completing contracts. Each contract will deliver a certain amount of funds as an advance the moment it is accepted, and additional payments will be made upon completion of each of the contract's objectives. Contracts also come with penalties; if a contract expires or is failed, funds will be deducted. The amounts involved in all these transactions are listed when a contract is examined in Mission Control.

The uses of funds as of version 0.25 include:

Recovering a craft can also replenish funds. Once a craft has safely touched down anywhere on Kerbin, recovering it will provide funds based on its cost and how many resources remain inside it. The amount recovered increases the closer the vehicle landed to the spaceport. The Recovery Transponder Fitting strategy can increase the recovery factor by upto 15% (limited to 100% recovery factor).

With normal Game Difficulty settings, the advance on a contract is typically sufficient to cover the cost of a reasonable vehicle capable of performing the requested task. By succeeding at contracts, recovering parts, and designing efficiently the space program can consistently run at a substantial profit.

Although the unit for "Funds" is not known, several names have been discussed (unofficially by the community):