Difference between revisions of "Jet engine" 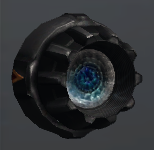 A jet engine is an air-breathing engine which uses onboard liquid fuel and combusts it with the oxygen drawn from the atmosphere. Due to the lower air pressure at higher altitudes its thrust output varies accordingly.

Technically, any rocket engine is also a jet engine as it forms a high-speed jet of reaction mass. But for KSP players, the term is limited to engines dependent on intake air.

Unlike rocket engines, a jet draws oxygen from the atmosphere rather than taking it from an on-board tank. This is represented in-game by a much lower rate of fuel consumption. Depending on the aircraft, jet engines can produce thrust at altitudes greater than 20 km. Jet engines do not perform in the same manner as rocket engines. Since Jet engines rely on a turbine to compress fuel and atmosphere together in order to produce thrust, it takes time to change speed. Also if the throttle or air flow are too low the engine will stall. By contrast, rocket engines give instant response to control input.

The flame out effect on a Basic Jet Engine

As of version 0.18 jet engines require intake air to run, provided by air intakes. Jet engines don't consume oxidizer, so the use of liquid fuel tanks is very wasteful because they come with an full oxidizer tank adding additional mass. When the intake air level isn't checked periodically a jet engine tends to flame out and suddenly doesn't generate any thrust. As this may happen unevenly it can cause severe spinning and potential loss of the craft.

One large difference from the jet engines compared to conventional rocket engines is, that the thrust also depends on the velocity relative to the atmosphere around. Starting with the (nominal) stationary value, thrust starts rising with additional speed, although the effect is only of minor impact at the J-33 "Wheesley". However, as more thrust most often leads to more velocity ( leading to more thrust ...) this behaviour should be considered at the more advanced engines, as it can easily lead to a rapid unscheduled disassembly. At a certain speed (the design speed of the engine) peak thrust is reached, from where on it decreases with additional velocity. At the maximum speed of the engine, it stops putting out thrust, resulting in a shutdown.

the velocity and atmosphere curves of the jet engines

Isp of all jet engines is unaffected by speed and height, which is different from pre 1.0 behaviour as well as from rocket engines. Thus, the fuel consumption varies according to thrust output.