Jool is a gas giant and the fifth planet of the Kerbolar star system. It is the most distant of the five planets and the hardest to reach. It is one of the most appealing targets for missions, however, because of its large and complex system of four moons: Laythe, Vall, Tylo and Bop. Orbits well-aligned with the orbital plane, and many intersections with moon orbits can easily be captured by a couple moons with little to no ΔV before having to correct your orbit. 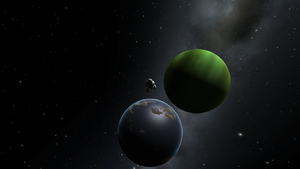 The ocean moon Laythe, about to transit Jool.
Jool has four natural satellites:* The ocean moon Laythe, currently the only moon possessing an atmosphere, is the closest to Jool and second largest of its moons. Due to its high orbital velocity, it is somewhat challenging to reach. Next to Eve, it's size and composition make it the most similar celestial body to Kerbin* The ice moon Vall, which is the third largest and second closest. Its orbital path and velocity sit almost exactly between Layth and Tylo.* The rocky moon Tylo, similar to Kerbin's Mun, although it has similar gravity to Kerbin. It is the third and largest body orbiting Jool, and is perhaps the easiest of the four to reach, with a stable orbit, large gravity well, and (relatively) slow orbital velocity.* The captured asteroid Bop, the smallest body orbiting Jool. Due to its distant, erratic orbit and low gravity, it is also challenging to reach.Laythe, Vall, and Tylo are in a Laplace resonance, with orbital periods of 1:2:4 respectively.Despite the fact that the moons can easily eclipse both each other and Jool, they do not.It has been released that Jool will gain a new moon in v0.18. Little of it is known, except that it has a yellow/greenish surface and will be named Pal [1]. Due to the amount of light it is also polausible that it is closer to Jool then Bop. An image of it can be found here