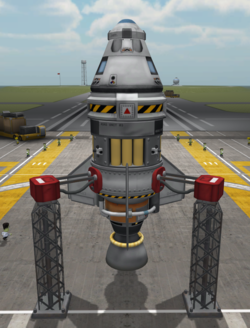 The Kerbal 2 is a stock ship which can be found in the VAB in version 0.21. It has a total mass of 19.36 t and a part count of 17. It is a small, powerful craft equipped with a Rockomax "Mainsail" Liquid Engine but only a Rockomax X200-8 Fuel Tank, and is only capable of a very short sub-orbital flight. Therefore it would have to be attached to a large launcher in order to get it into space, let alone into orbit.

The first stage (stage 2) is comprised of a Rockomax "Mainsail" Liquid Engine and a Rockomax X200-8 Fuel Tank (as I mentioned earlier), and includes a Large Advanced SAS Module, an FL-R1 RCS Fuel Tank and a Rockomax Brand Decoupler, along with four RV-105 RCS Thruster Blocks. It has three Delta-Deluxe Winglets for stability during the (very short) flight, and three TT18-A Launch Stability Enhancers for launch stability. At full thrust this is enough to reach a height of 3,088 metres above sea level.

Just purely as a stock craft, this craft is only good for short flights up to 3,088 metres only, and not capable of orbital flight.

In order to reach orbit, one would have to build a launcher which can lift it. As well, one might decide to replace the Rockomax ‘Mainsail’ Liquid Engine with a less powerful engine, such as the Rockomax "Poodle" Liquid Engine. The player should also replace the Rockomax X200-8 Fuel Tank with a Rockomax X200-16 Fuel Tank to add more fuel. Also adding four more RV-105 RCS Thruster Blocks and organising all eight to be the same distance from the centre of mass as all the other ones would allow for easier maneuvering. And finally, moving the RCS Blocks so that they were not diagonal from the centre of mass would allow the player to translate (move the craft sideways) faster and easier.