The Kerbal Space Center (abbr. KSC), located on Kerbin, is the only current location that missions can be launched from. Featuring a number of buildings and structures on an approximately 25 km² large plateau, it acts as a central hub granting access to all parts of the game. All buildings, except for the runway, are placed on hexagonal sections (mostly regular, except the one for the tracking station which is a truncated triangle). 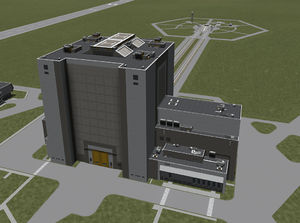 The Vehicle Assembly Building (or VAB for short) is a large construction facility at KSC, where rockets and other vertically launched spacecraft can be designed. Craft designed in the VAB can only be launched from the Launch Pad. 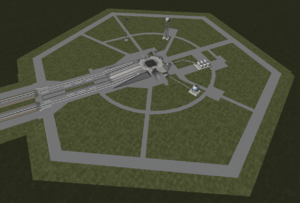 Craft designed in the VAB will be launched from the launch pad. This launch platform allows only vertical launches or starts of rovers, as it is elevated and planes don't have enough space to climb.

The Space Plane Hangar (or SPH for short) is a facility similar to the VAB that allows construction of aircraft and spacecraft in a horizontal environment which can then be launched from a conventional runway. 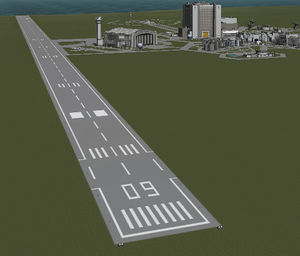 Vessels designed in the Space Plane Hangar can only be launched from the runway. It can also be used for landing. At the moment there is only one runway (09/27) in service with a length of 2526 m going from east to west and a width of 70 m. There is also a runway on an island to the southeast, which is available for landing but not launching. By default, craft designed in the SPH face a 90° heading (facing east) and start from the west end.

The Tracking Station allows access, observation and management of all missions currently active, including splashed-down or landed ships. Note that this does not include crashed or otherwise ended missions. Any Kerbals, craft or debris safely on Kerbin's surface can be recovered here. Debris can be tracked and deleted here. Celestial bodies can also be observed at the Tracking Station. 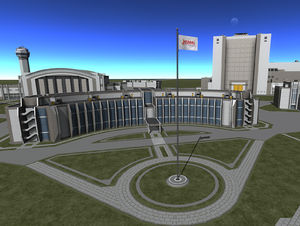 The Flag Pole is located in front of the Astronaut Complex and can be used to select a default mission flag. It used to be located south-west of the VAB, but was moved in version 0.21. 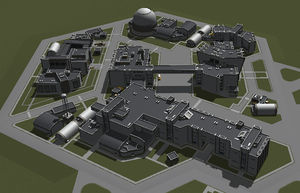 The Research and Development building allows players to unlock spacecraft parts in career and science mode by researching nodes on the tech tree. 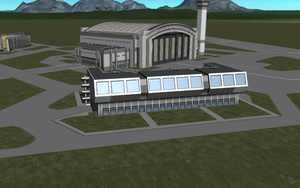 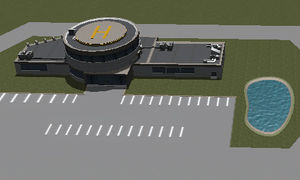 The Administration Facility is a small building in face of the Astronaut Complex. It is can be used for getting/using strategies. 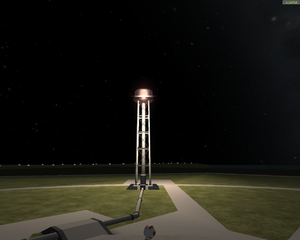 Located south-east of the Launchpad, the Water Tower is about as tall as 1/3 of the VAB

The KSC is on a roughly square-shaped, sandy peninsula on the east coast of an Africa-shaped continent. To assist in spotting the KSC from orbit, please refer to this handy map (it's marked with the red arrow):