Difference between revisions of "Kerbin" 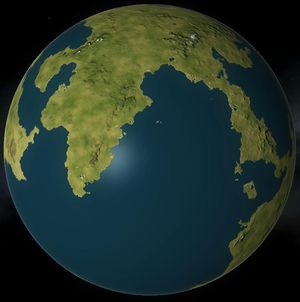 Kerbin as seen from orbit in version 0.15.2
File:NJ6qJ.jpg
A projection map of Kerbin, as of 0.14.1 and before (including the demo) 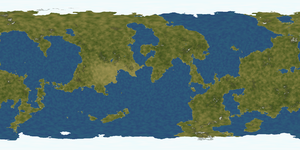 An accurate full-colour projection map of Kerbin as of 0.14.2 and above

Kerbin is the planet where the Space Center is located and the main focus of Kerbal Space Program. It has two moons, named Mun and Minmus. It orbits the M class star Kerbol.

Kerbin has a roughly equal distribution of liquid water and solid land, with polar icecaps and scattered deserts. Between versions 0.7 and 0.14.1 (Including the current demo version of 0.13.3), some mountain ranges exceeded 600 m in height. The highest point was at approximately 900 m altitude.[1] In registered versions 0.14.2 and later, a new terrain engine has resulted in mountains exceeding 3 km high. The tallest mountain at least 3750 m.[[2]]

Kerbin has an atmosphere of unknown composition, though because Kerbin has plants and animals, it can be assumed there is O2, N2, and CO2. The atmosphere gets exponentially less dense as altitude increases (5 km scale height), and ends at 69,077.55 meters. [3][4]

As of 0.15.2, atmospheric temperature varies with altitude in a roughly Earth-like manner.[5]