Kerbin is a planet which is home to the Space Center and the main focus of Kerbal Space Program. It has two moons, named Mun and Minmus. It is the third planet in orbit around the M class star Kerbol. It is the third largest planet (after Jool and Eve) and the fourth largest celestial object around Kerbol (the moon Tylo being slightly larger). 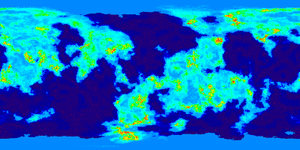 Kerbin has a roughly equal distribution of surface liquid water and solid land, with polar icecaps and scattered deserts. There are mountains exceeding 3 km in height, with the tallest peak being at least 3750 m in altitude.[1]

Kerbin has an atmosphere of unknown composition, though because Kerbin has plants and animals, it can be assumed there is O2, N2, and CO2. The atmosphere ends at 69,077.55 meters and, as on Earth, becomes exponentially less dense as altitude increases (with a scale height of 5 km).[2] In general, the atmospheric pressure and density on Kerbin, at an altitude expressed in meters, are:

From the lowest stable orbit around Kerbin (70 km), the amount of delta-V needed to reach the orbits of other celestials is as follows: