In career mode, maneuver nodes are unavailable at first. Using them requires upgrading both the Tracking Station and Mission Control. 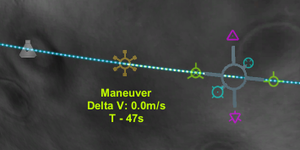 Two maneuver nodes with one in edit mode

Hovering over a node displays the time of arrival and the delta v needed to perform the maneuver.

After the node is created, it can also be dragged along the orbital path at any time. This is very useful when planning an orbital rendezvous and the placement was a bit off. When the view is focused on the maneuver node, dragging it can be difficult to control. It's much easier when moving a maneuver node to place a temporary node nearby and focus the view on that one while dragging.

The relationship between these three orbital vectors - prograde, radial and normal - is defined by the right hand rule. If you hold the first three fingers of your right hand at right angles to each other in the most natural way, the index finger points forwards representing prograde, the middle finger points towards the orbital focus representing the radial, and the thumb points "upwards" represents the normal. For a prograde equatorial orbit around Kerbin (following Kerbin's rotation, i.e. eastward), normal will be north, prograde will be east, and radial will be down.

These vectors directly change the speed of the craft. Burning prograde will increase velocity, raising the altitude of the orbit on the other side, while burning retrograde will decrease velocity and reduce the orbit altitude on the other side. To raise a craft from a lower orbit into a higher orbit using a Hohmann transfer two prograde burns are executed; while lowering an orbit two retrograde burns are used.

This is the most efficient way to change the orbital shape (specifically the most common case, raising or lowering apsides) so whenever possible these vectors should be used. When the craft is powerful enough it is possible to switch the orbital inclination by 180° when burning retrograde to cancel out all orbital velocity and then build it back up, which is faster and more efficient than using the normal vectors.

These vectors are parallel to the orbital plane, and perpendicular to the prograde vector. The radial (or radial-in) vector points inside the orbit, towards the focus of the orbit, while the anti-radial (or radial-out) vector points outside the orbit, away from the body. Performing a radial burn will rotate the orbit around the craft like spinning a hula hoop with a stick. Radial burns are usually not an efficient way of adjusting one's path - it is generally more effective to use prograde and retrograde burns. The maximum change in angle is always less than 90°; beyond this point the orbit would pass through the center of mass of the orbited body and the ship would traverse a slow spiral in towards the orbited body.

Upon selecting a maneuver node six symbols will appear, each corresponding to the vectors above. Each symbol can be clicked and dragged to adjust the amount of velocity change desired on each axis. Pulling a symbol away from the center of the node increases the speed change along the selected axis, and pushing a symbol toward the center of the node is equivalent to pulling the symbol on the opposite side. The further the symbol is pushed or pulled, the more rapidly the adjustment will be made. Adjustments to an axis can be made also by hovering over one of its nodes and scrolling the mouse wheel.

After adding a maneuver node three new values will appear next to the navball:

Because a maneuver node assumes an instantaneous velocity change, a perfect burn is impossible; to get the best results, it is recommended to burn half of the time before the node and the other half directly afterwards.

Maneuver nodes can be used to reach a specific orbit without needing to continuously monitor the orbital map. When performing an aerobraking maneuver the current maneuver node will automatically update the needed velocity change as the craft's velocity decreases; this can be used to perform manual corrections if the aerobraking turns out to be insufficient or excessive. 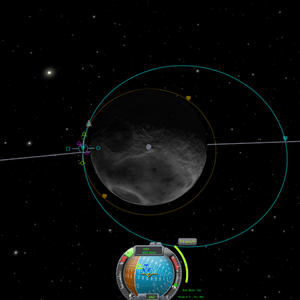 The nav ball at the bottom shows the blue marker the vessel must be oriented to in order to perform the desired maneuver during the burn.

SAS can help line up the level indicator with the blue burn direction indicator as soon as maneuver node is set up - once the maneuver has been defined, the burn direction will not change regardless of the craft's position. Pilots of experience level 3 stars or higher enable the maneuver marker direction selector option when S.A.S. is enabled. This can automatically establish and maintain the vessel orientation throughout a maneuver burn. The more expensive, higher research level Probe cores can also do this.

On completion of the burn the marker may begin to move away from the current heading; this is merely because it was not perfectly lined up. This can generally be ignored since it is usually a small error rather than a large one. The craft can be rotated to refine the burn direction and reduce such heading errors during long burns since they will be much more apparent, although care should be taken not to over-correct. If the craft is over-correcting with the smallest burn, it may be best to wait to make a small correction burn later, when the orbit will be less sensitive to applications of thrust. Alternatively engines with lower thrust, like RCS engines or engines with adjusted thrust level tweakable, could be used.

Once the desired velocity change approaches zero the throttle should be reduced to avoid overshooting; once it reaches zero (or reaches a sufficiently small value) the burn should be stopped (press X). Once the maneuver is completed the node should be deleted to clear the blue directional marker. This is especially important if multiple maneuver nodes are set up since the next node values will not show up until the last one is deleted.