The Mk1-2 Command Pod was a Command Module housing three Kerbal crew members during their mission. It was a durable,[1], rounded command pod. Currently, it is the second most expensive pod available in Career or Science mode, and boasts the highest mass of any other capsule in the game. 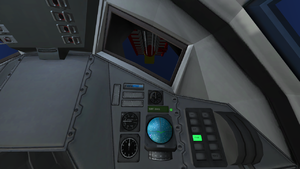 The extremely high density of the pod makes it useful for shifting the center of mass and orientating ships during aerobraking/reentry, additionally the high mass and temperature tolerance makes the pod useful for absorbing heat flux and it makes a moderately effective heat shield in and of itself.