The Mk1 Cockpit is a cockpit-style command module that is designed to be placed on the nose an airplane or spaceplane that uses parts of a small radial size. 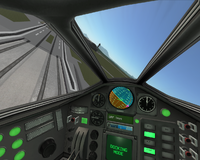 Interior View of the Cockpit Mk1 on the runway

The Mk1 Cockpit is generally found at the front of the spacecraft and can house one Kerbal crew member. It's especially useful for IVA flights because its large glass canopy offers a wide field of view; however, it cannot mount an inline parachute because it lacks a frontal node and is less useful for rockets because it's heavier than the Command Pod Mk1.

The Cockpit Mk1 is the only of the three cockpits to come with an IVA. The other two require the usage of mods in order to have functioning IVAs.