Difference between revisions of "Mk1 Lander Can"

The Mk1 Lander Can is a Command Module housing a maximum of one Kerbal crew member during its mission. The cockpit in the command module is designed for landing and has a "down" looking window to facilitate such activities while piloting from inside the lander can. 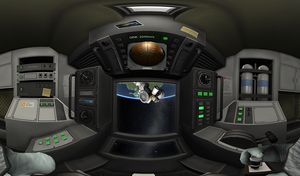 Inside panorama view on Kerbin

The Mk1 Lander Can, as the name suggests, is an excellent choice to utilize as a base part for both a moon or planetary lander. This command module had two large windows, one facing out from the pilot seat and one angled down to allow the pilot to view the ground approaching while landing. On the exterior of the lander can, the flat octagonal surfaces allow for secure attachment of radial engines, landing gear, science equipment, or any other necessary equipment. Both the top and bottom surfaces of the lander can are adequate to install engines, fuel tanks, RCS bladders, or even a docking port.

The main downside to the Mk1 Lander Can is that it is a very fragile module which cannot withstand impact forces more significant than 8 m/s. Attempting to land after any landing gear has was damaged has occurred is very risky and requires a prolonged and controlled descent. Though a fragile module, a critical trade-off is that it is incredibly light and becomes a critical part to use in situations where a good deal of delta-V is required.

The Mk2 Lander-can is an upgrade over the Mk1, which is over double the mass and can house two Kerbal crewmembers. Though at times unwieldy and top-heavy, a double-stacked Mk1 Lander Can still maintain a smaller mass and cost compared to the Mk2. With this option, two crew members total (one in each lander can) are deployable in a lighter and cheaper setup without having to utilize the larger Mk2 Lander Can.