Difference between revisions of "Mk2 Lander Can"

The Mk2 Lander Can is a command module housing two Kerbal crew members during their mission. It has two variants: a cylindrical lander and a rectangular manned rover body. 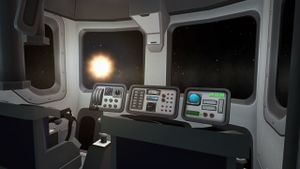 View of the cockpit from inside

Generally placed at the top of the rocket as part of a lander or rover, the Mk2 Lander Can provides full command module functionality. While it features two "Rockomax" size 2 nodes on the top and bottom, it also features two size 1 nodes on the front and back.

Like its smaller counterpart the Mk1 Lander Can, the Mk2 Lander Can is well-suited to perform IVA landings given its superior downward visibility versus other pods. The service bays on the side are also very useful in storing and concealing science experiments, batteries, power sources and other small parts, which can save on both the mass and part count of a dedicated Service Bay, although it cannot hold as much.

Despite the manufacturer's description, the Mk2 Lander Can has the same thermal tolerance as many other parts, although it is still lower than most command modules. It is able to survive low-speed atmospheric re-entry. However, the front window protrudes out from the 2.5m structure, which means that the Mk2 Lander Can cannot be protected by a Heat Shield (2.5m).

If 2 pilots are aboard, the ship containing this lander can will be able to control probes or rovers without a connection to the KSC.

As of version 1.6 this command pod has two models that can be switched in the editor. 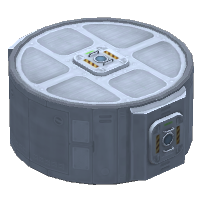 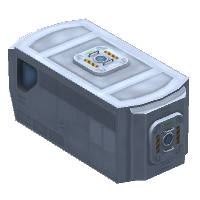 The different variants of the command pod