The Mk3 Passenger Module is a plane-styled crew cabin that can hold 16 Kerbals, making it the largest of all the habitation modules.

Like other habitation modules, the Mk1 Crew Cabin increases the capacity of a vessel, allowing it to transport more Kerbals. This can be used to transport Kerbals to and from space stations, act as crew quarters for stations and vessels, and carry tourists or rescued Kerbals from contracts.

The Mk3 Passenger Module has the same impact tolerance (50 m/s) and heat tolerance (2700K) as other Mk3 parts. It has 16 inventory slots, able to hold a relatively small 400L of cargo. Passengers in the cabin can perform a crew report.

The inside, as seen in IVA from the back rows, resembles that of an airliner, an aircraft that carries passengers, with an aisle in the middle, four pairs of seats on each side, with carry-on baggage bays overhead, and doors on both ends. The module also has two hatches to the outside (bottom and top); by default, the top one is used as an exit by kerbals going EVA (from the crew portraits), but any of the four exits may be used manually by clicking on it. The top and bottom hatches have signs "Emergency use only". All four hatches have handholds. 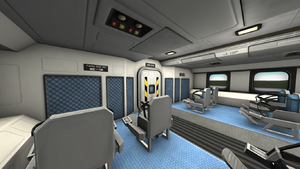