Due to its close proximity to Kerbol, the atmosphere, while thin, is debilitatingly hot. Rockets overheat easily, making a high thrust-to-weight ratio and/or a heat-resistant rocket design necessary for a safe landing. 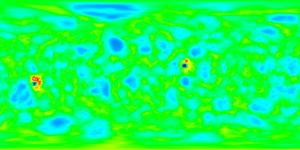 The surface is very mountainous, with surprisingly few craters. The crust almost looks fractured. Up close it is much redder than in the map view and has many white dots. There are two volcanoes (Shown as red circles in the topographic map) on Moho.

Moho has a very thin, very hot atmosphere that poses a heat threat to most or all rocket motors. It extends to an altitude of approximately 17,000 meters. Some aerobraking is possible, though the terrain makes this risky — even reaching an atmosphere as thin as 0.00001 atm (equivalent to 57.5 km altitude on Kerbin) requires flying at 12.5 km, below the height of Moho's tallest peaks.

Like all atmospheres in the game, Moho's atmosphere fades exponentially with increasing altitude (with a scale height of 2000 m). In general, the atmospheric pressure on Moho at an altitude expressed in meters is:[1]

During dawn and dusk, Moho's sky is bluer than its normal red color.

Geosynchronous orbit around Moho is not possible — it would require an altitude of 0.00 m, outside of Moho's sphere of influence.

As of 0.18, it has been announced that Moho will have a complete change in topology, and will lose the superheated atmosphere. These features will apparantly be later added to a new, as yet un-named planet orbiting close to the Sun.[2]