Mun, also known as the Mun and sometimes written as Mün, is a large moon orbiting Kerbin. It can be thought of as an analogue to our own Moon. It is gray in appearance with craters of various sizes and mountains exceeding 3400 m in height. The gravitational pull the surface is 1.63 m/s², 8.18 m/s² less than that of Kerbin and about the surface gravity of Earth's Moon (1.624 m/s²). It is possible to land on the Mun or use it for gravity assist (gravitational slingshots) to outer bodies such as Minmus or into Kerbol orbit.

Synchronous orbit around the Mun is not possible, since it would have to occur at an altitude of 0.00 m, beyond the Mun's sphere of influence. However, putting your spacecraft just outside Mun's SOI and having the same SMA would make it appear stationary. A normal 25 km orbit can be achieved using around 800 m/s delta V. A semi-synchronous orbit with half the rotation period of the Mun is possible at approximately 1797.41 kilometers.

The Mun's terrain is rough, grey, and scarred by craters. Its low-lying areas tend to be darker in color. The Mun also features canyons which can be hundreds of meters deep and a few kilometers long.

The Mun's highest points reach a maximum altitude of more than 5029 m. This is likely a bug, because this altitude allows 5× warp, which is a non-physics, stable orbit warp (so it's like a crashing... while being at the stable orbit).

As of 0.21 the Mun is peppered with procedural impact craters making Mun landing more difficult.

The Mun's orbit keeps it directly above Kerbin's equator. Because the Mun is tidally locked to Kerbin with a perfectly circular, non-inclined orbit, exactly 50% of the Mun's surface (excluding areas on the edge obscured by the Mun's mountains) is ever visible from Kerbin. This also means that Kerbin is only visible from this same 50% of the Mun's surface, and that Kerbin never sets or rises as seen from the Mun. The Mun longitude for which Kerbin remains directly above in the sky (at the Zenith) is about 47 degrees east. The Mun's equator is coplanar with Kerbin's, so any location on the Mun's equator that faces Kerbin will also face Kerbin's equator. Kerbin is not tidally locked to the Mun, so any point on the Mun where Kerbin is not obscured by the Mun's landscape will be able to observe every point on Kerbin as Kerbin rotates. Kerbin's synodic rotational period with the Mun is 25617.909 seconds, or 1.18323 Kerbin solar days. 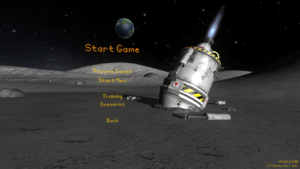