The navball is one of the primary instruments to control the craft. Understanding the navball is critical to successful flight, both in space and in atmosphere. When the camera is not in chase mode, only the navball can tell the current orientation and what the rotation commands will perform. It is similar to the artificial horizon used in real-world planes. 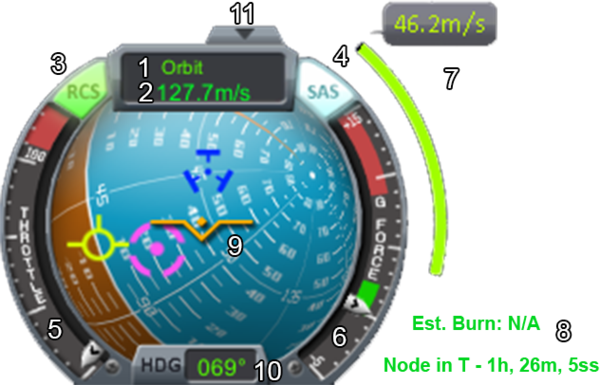 To land on the surface of a planet or other celestial body, it is important to have the reference set to Surface to account for the rotation of the celestial body. For orbital maneuvers (i.e., not landing), the planet's rotation is unimportant, except in the case of a synchronous orbit, in which case the point of reference should be set to Orbit, which is like Surface but without accounting for the planet's rotation.

Your speed is measured relative to the point of reference and is given in meters per second (m/s). Speed is never negative. Even when you're moving toward a target (as in a docking maneuver), your closing speed will always be shown as a positive number.

The most important part is the center ball, which shows the current orientation of the craft and multiple directions which maybe important for future movements.

While on the ground, the blue background hemisphere indicates the skyward direction (up; away from the center of gravity), while brown indicates groundwards (down, towards gravity). The thin white line separating the blue and brown hemispheres is the artificial horizon. These indicators are relative to the part from which the craft is controlled, not necessarily the nearest planet, target, or orbital plane. This can be changed by selecting Control from Here when right-clicking on docking ports or command modules that may be on the craft.

On the navball are three different types of markers. All markers except the maneuver marker come in pairs, with an opposite marker on the opposite side of the virtual ball.

If a target is selected, the purple icons will indicate the heading directly to the target. Because the target is typically moving, the target markers move as well. Usually the target marker and velocity marker don't follow exactly the same path and tend to drift away. This is important for docking, which requires frequent input to hold the craft on course. These markers are not relative to the point of reference.

If a maneuver is planned on the map, the blue Maneuver marker points in the direction needed for the burn. This is the only marker without an opposite pair.

Symbols on the ball instrument

On maneuvers, there is a maneuver Δv indicator, a green bar and small info text right of the navball. The bar gives a visual indication of the total amount Δv required to accomplish the maneuver, and it will deplete as the burn is performed. The bar has no scale; it always starts out full, regardless of the amount of the burn. Below that is the estimated burn time: how long the burn will have to continue until the maneuver is completed. This is a simple estimate based on the current maximum thrust available. When engines get activated or deactivated this value will adjust automatically and may result in a longer burn time. The time estimate doesn't change if the engines are operated at less than 100% thrust; it simply counts down more slowly. Below the burn-time estimate is a countdown timer indicating the time left until the craft reaches the next maneuver node. Opinions vary on whether to:

Throttle indicates how much power all engines in the current stage are delivering (in percent). Beware of continuous full throttle, as engines can overheat and be destroyed. A single throttle controls all activated engines, so if the engines are not balanced the only way to adjust individual throttles is by setting/adjusting total thrust limits of the engines by using tweakables. The throttle controls percentage of maximum thrust, not absolute thrust, so smaller engines at full throttle will apply less force than large engines at partial throttle. Solid rocket boosters cannot be throttled.

The heading is the compass direction the craft is facing, in degrees ranging from 0° - being true north - to 359°, going clockwise (meaning 90° equals an eastern direction).

Pitch is indicated in degrees, ranging from +90° (up) to -90° (down). To better indicate positive and negative pitch, the bottom half of the navball is painted brown and the top half in blue.

Roll angle is indicated using the level indicator. If the level indicator is parallel to the dashed pitch lines, the vessel is orientated horizontally. Combining this with the knowledge that blue means skyward and brown ground-ward, it can even deduce if it is flying upside down by only looking at the navball.

The G force gauge provides a visual scale of the acceleration exerted due to gravity and/or craft acceleration, measured in g. One g is approximately 9.81 m/s2. Not to be confused with the SI-unit gram. G forces can be either positive (upwards on the scale) or negative (downwards). Note that experiencing sustained excessive g forces (the red zone on the scale) will kill any Kerbalnauts and may damage sensitive parts.

Clicking the little arrow on the top of the navball (Hide) will toggles its display on-screen. There is also an assignable keybinding to do the same in the input menu.

These are the most basic orientation controls of the craft, here is a short explanation on how their actions are represented on the navball with the default key bindings: