An ocean is a body of liquid, usually saltwater. There are three bodies which have oceans: two planets, Kerbin and Eve, and Laythe, a moon of Jool, which is both the only moon with an oxygenated atmosphere and the only moon with oceans. 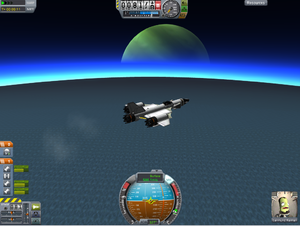 A jet flying over Laythe's seas

Both Kerbin and Laythe have oceans of liquid water. Laythe's oceans appear to be saltier than Kerbins', as it does not freeze at 'normal' freezing temperatures (about 0* Celsius, 32* Fahrenheit). Eve, on the other hand, has oceans of a purple liquid called 'Explodium'. It appears to be rocket fuel. 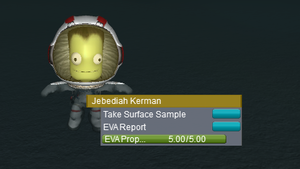 The oceans on the three bodies usually are their own biome. Kerbin's oceans are the 'Water' biome; Laythe's, the Sagen and Degrasse seas, and Crater and Crescent Bays; Eve, the Explodium, Eastern and Western seas, and Akatsuki and Crater Lakes. Kerbin's Shores biome and Eve's and Laythe's shallows biome all represent the boundary between their oceans and their land.

Kerbals apparently believed that Moho had oceans of molten rock, according to the Kerbal Astronomical Society's description of Moho:

However, Moho does not, in fact, have oceans of lava or any other liquid.

Things to do in Oceans

As oceans are liquid, vessels can sink into them (At least until they hit the seafloor). Submarines, like this one, can be built and piloted in Kerbin's seas. Many parts, however, float, which allows the building of boats.

A probe lands in the water next to one of Laythe's islands
Retrieved from "https://wiki.kerbalspaceprogram.com/index.php?title=Ocean&oldid=95241"