Overheat bar next to the fuel bar of an overheating SRB. 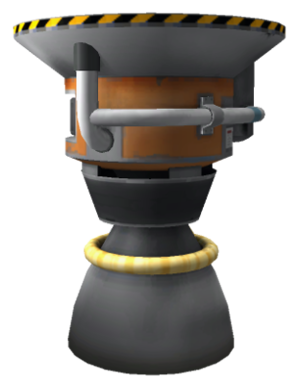 The most powerful engines tend to overheat the most.

In the game Kerbal Space Program, the largest and most powerful of the engines tend to overheat. To avoid overheating, thrust should never be at 100% for a long time. Depending on the configuration it may need to be kept below about 66%. Different engines have different overheating rates and levels.

This is most noticeable on the most powerful engines, such as the Rockomax "Mainsail" Liquid Engine, overheat very easily. It is possible to dampen overheating by using smaller fuel tanks. Using the Mainsail engine and Rockomax Jumbo-64 Fuel Tank for example lets the engine overheat very quickly, while the tank one size smaller, the Rockomax X200-32 Fuel Tank, lets run the engine at higher thrust level without overheat.

Overheating can also occur when at close distances to Kerbol.

or: How I Learned to Stop Worrying and Love the Overheat

As of version 0.23.5[outdated], overheat only really matters if the overheat bar reaches 100%. If the bar fills up, the engine explodes; if it doesn't fill up, there's no problem.

In practice, this means that overheating can often be entirely ignored. Fuel supply is frequently exhausted long before it reaches 100%, or the burn is completed and the engine shutdown again.

Even the Mainsail under a pair of stacked Jumbo-64 tanks can run at 100% for long enough to fully drain both tanks, without exploding, so it's frequently unnecessary to make changes to eliminate the overheat. One way to approach it is to simply ignore overheat entirely when designing, then try the craft on some normal flight profiles. If the overheat bars stay comfortably below 100% (e.g. no more than about 80%), it's not an issue.