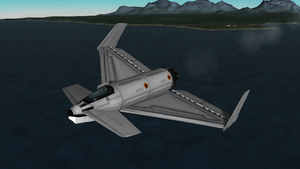 A Space plane in midflight on Kerbal

Oxygen is a gaseous element and is currently present in only 2 bodies in Kerbal Space Program; Laythe and Kerbin. The element is important for air breathing engines on space planes. Kerbals currently don't require oxygen to keep them alive, thus there is no method of obtaining, synthesising, or filtering any oxygen (as of ver. 0.21).

Once the atmospheric pressure on a planet/moon with oxygen present is above the correct pressure(See Jet engine), Jet Engines will become able to function (if oxygen is being supplied, see Intake Air). Note that you will need more than just air breathing engines to get to Laythe (See This Laythe Travel Tutorial).