The PPD-12 Cupola Module is a Command Module housing one Kerbal crew member during its mission. It is inspired by the Cupola module of the International Space Station. 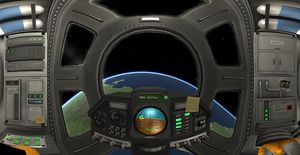 Inside panorama view on Kerbin
The Cupola Module's main purpose is to provide a good outside view from space stations or bases. It is very heavy (even heavier than the three-Kerbal Mk1-2 Command Pod) and also fragile, making it a poor choice for lighter rockets. It does have a pretty good rotary power and energy capacity, but these can be acquired by other, less mass-intense means.

To put things as simple as simple can be, the PPD-12 should be incorporated in heavy spacecraft with a bit too many parts, insufficient RCS fuel storage capacity and one or two electrically operated instruments which rarely need to be used, but require lots of power to be used.

The PPD-12 is one of the few parts in Kerbal Space Program that is covered in multi-layer insulation.