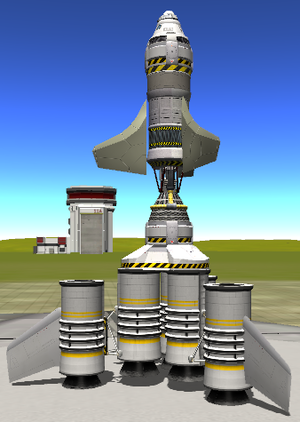 A three-stage rocket featuring the default parts of version 0.8.5

Parts are the basic assembly items for rocket and space plane construction in Kerbal Space Program. As a whole, they compose the building materials the player can choose from in the Vehicle Assembly Building and Space Plane Hangar. Parts are split up into seven major categories: pods, propulsion, control, structural, aerodynamic, utility, and science. As of the latest paid version of the game (0.18.2), there are one-hundred and twenty-eight parts to choose from; the demo version (0.13.3) has seventeen parts in total. These parts, in particular, may also be called vanilla parts, default parts, or stock parts.

Ship mass is specified in metric tons (t), and engine thrust is measured in kilonewtons (kN).

Thrust to weight ratio at sea level on Kerbin is calculated by the following equation, which applies only to liquid or solid fuel rocket engines. (Jet engines use a complicated formula on a vehicle to vehicle basis.)

is the weight of the engine at sea level on Kerbin's surface in kilonewtons.

is the mass of the engine in metric tons (t).

is the acceleration at sea level on Kerbin's surface: 9.81 m/s².

Specific impulse at sea level on Kerbin is is calculated by the following equation. To reduce confusion, specific impulse is given in both velocity and time units. Please see the discussion page for further reading on ways of expressing specific impulse.

is the specific impulse measured in seconds.

is the mass flow rate in kg/s, which is negative the time-rate of change of the vehicle's mass since propellant is being expelled.

is the acceleration at sea level on Kerbin's surface: 9.81 m/s².