The RT-10 Solid Fuel Booster (also known as an SRB) is a solid rocket booster used to provide a short burst of additional thrust to a rocket. It comes as a single unit. The engine and fuel tank are one single part which means that it isn't possible increase the burn time for it by adding more fuel tanks.

The RT-10 is a solid rocket booster (SRB) that can be fired once, cannot be shut down or throttled while operating and is notable for its very high specific thrust (500N/kg and does not require separate tanks) and high propellant fraction (0.867). This makes it very useful for the lift-off stage of a large launch vehicle early in Career games when the Rockomax Mainsail and Skipper engines are not yet available. Traditionally, only staggered and ripple-firing techniques were available to modulate thrust, however, starting with 0.23, the thrust and propellant load can be adjusted by right clicking on the part in the vehicle editor (VAB or SPH). This makes it easier to use for smaller boosters.

Another possible use is as a kick stage for imparting high impulses to a very light payload: in this role, the high propellant fraction of the RT-10s offsets the low vacuum specific impulse and results in a high mass ratio. The high thrust allows a complete burn while in the vicinity of a planet, taking advantage of the Oberth effect. The short maneuver duration makes the predicted outcome of an associated maneuver node more accurate. Starting with editor tweaking in 0.23, it is now possible to off-load propellants, but since this can't be done in flight, careful planning is still required (The LV-909 Liquid Fuel Engine is recommended for beginners, reached by researching Survivability immediately after Basic Rocketry.)

RT-10 Solid Fuel Boosters are prone to overheating, especially when large numbers are clustered together. The main ways to overcome this are ripple firing to keep too many in the cluster from firing at once, attaching "cooling" parts (typically struts, control surfaces or winglets), and by reducing the thrust by right-clicking the part in the editor (since 0.23). There is also a glitch in which attaching an RCS thruster completely prevents overheating.

Deliberately overheating the RT-10, such as by stacking two and firing the upper before the lower has burned out, allows the motor to function as an ad hoc decoupler (see explosive decoupling.) This is useful in mission-race Career games for maximizing Science while at the lowest level of the technology tree, before proper decouplers are available. It will also make the crew panic, including Jebediah.

Thrust can be regulated with tweakables. The minimum thrust required for the booster to lift its own weight off Kerbin's surface is 15 %, or about 37.5 kN. Thrust limiting allows for longer burns with lower acceleration. The specific impulse value remains the same for all thrust-limiter settings.

Between 0.7.3 and 0.15.2, the RT-10 was of limited use, mainly for providing extra challenge or silliness related to its high thrust to weight ratio. In rare cases it provided a small performance boost from overcoming the sticky pad bug or getting a rocket up to ideal speed.

In 0.16, the RT-10 had a specific impulse (or Isp) of 442.4 s, higher than any other solid or liquid fuel rocket, making a useful, if situational, choice (especially during launch). However, its increased mass in 0.17 reduced its Isp to 212.4 s. Other than these foibles, the RT-10 is possibly the most consistent original part, still looking and behaving much as it did in the earliest releases. 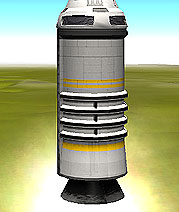