The Rockomax Jumbo-64 Fuel Tank provides fuel to attached liquid fuel engines, and was the largest liquid fuel tank prior to 0.23.5. The appearance of the tank, including the rust-like orange colour is inspired by Space Shuttle external tank. However, unlike the real life counterpart containing liquid hydrogen and liquid oxygen, the Jumbo-64 contains the unspecified liquid fuel and oxidizer. 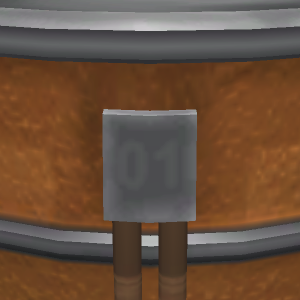 The Mainsail produces less heat in 0.22. Its heat production was lowered from 500 to 400, reducing the chance of overheating. The LV-N will no longer overheat under this tank as of 0.22. The Aerospike has a higher maximum temperature as of 0.22, also reducing its overheat risk.

Before 0.23.5 it was the heaviest part, when fuelled, and the largest tank. Both records go the Kerbodyne S3-14400 Tank with it's release. Additionally the LFB KR-1x2 was released in 0.23.5 which can store the same amount of fuel and additionally provides engines. So even between all tanks with a large radius, or smaller, the Jumbo-64 tank is not the heaviest part and shares the record of the largest tank of that radius with the LFB KR-1x2. Of the tanks introduced in 0.23.5 it's only larger than Kerbodyne S3-3600 Tank which is the smallest of the new tanks.