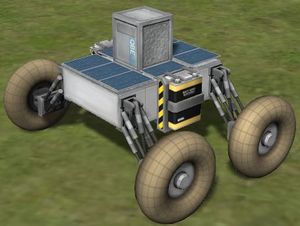 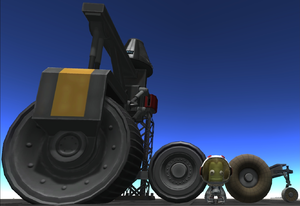 In a straightforward design, a rover will have an unmanned command module on top of a Probodobodyne RoveMate body. However, this typically means that the top of the probe's controller is pointing straight up. As a consequence the level indicator and "HDG" number on the Navball will not be very useful while driving. The heading will not correspond to the forward driving direction, but indicates which side of the rover is currently the lowest. The actual heading can sometimes still be estimated by imagining that you "pitch down" until the level indicator hits the horizon. (If the command module is rotated, you may have to substitute "pitch down" by "yaw left", "yaw right", or "pitch up".)

Alternatively you can get a proper indication of the heading, roll and pitch by pointing the top of the probe core in the forward driving direction. This is especially useful when using a rover to complete a survey contract, as the waypoints in the map view can be selected to make them visible on the Navball. The waypoint marker will then appear near the level indicator on the Navball when the rover is pointed in the right direction.