Difference between revisions of "Satellite"

Artificial satellites can be used for unmanned flights to test rocket designs, or to travel to other planetary bodies to collect 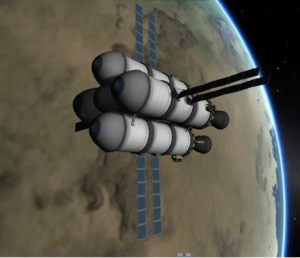 An artificial satellite in low orbit around the planet Kerbin, pictured here above the desert biome
Retrieved from "https://wiki.kerbalspaceprogram.com/index.php?title=Satellite&oldid=68580"
Categories: