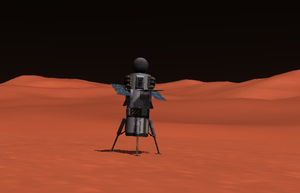 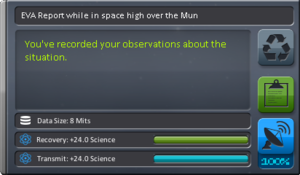 Science is a gameplay feature used to unlock parts in the technology tree when playing in the Career or Science modes by way of science points, which are mainly obtained by performing various scientific activities in different situations and biomes. Science may also be obtained upon successful completion of certain contracts, or gained through the implementation of administrative strategies. Experiments can be removed from the parts they were performed in and are stored with a Kerbal on EVA. Additionally, science experiments can be stored in and retrieved from any part that Kerbals can ride in, although only one copy of an experiment for any specific situation (e.g. EVA report flying over Kerbin's shores) can be stored per command pod. Science and all related instruments and buildings are made inoperative while in Sandbox mode due to its triviality—all parts are available from the start of a Sandbox game.

The following table lists the body-specific recovery multipliers as of 1.0.5: 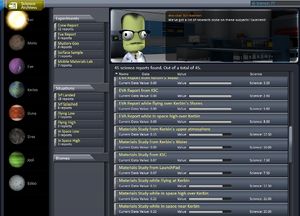