The Technology tree allows the player to unlock more advanced parts for constructing variously leval craft. It is a branching tree structure composed of nodes, each containing a set of one or more parts. Previously collected Science points have to be spent to research a node, which then unlocks its parts for use in the Editor. Funds may also be involved in unlocking individual parts.

The tree is accessible via the Kerbal Space Center Research and Development Facility's “Technology” tab. As part of the Science system, the Technology tree is not available in Sandbox Mode; instead all parts are automatically unlocked. All other modes begin with the initial node “Start” unlocked. Each node beyond it has a prerequisite node or nodes which must be unlocked before it can be researched. Unlocking the entire tree requires 16,918 Science. Before difficulty modifiers, there are 392,019.3 Science points available from experiments, and 6,055.8 from recovered vessels.

There are two additional placeholder nodes in the stock game which are included in the table below, but have no parts currently assigned to them. The nodes appear towards the end of the Tech Tree, and are only displayed in-game when a mod (or mods) are installed which use them. These nodes are: Nanolathing, costing 550 Science, and Experimental Motors, costing 1000 science. While these cannot be unlocked via research, it is technically possible to unlock them via green monoliths. 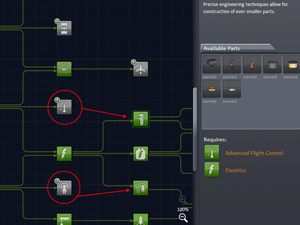