Moho is arguably the hardest planet to get to: It's low orbit around the sun is inclined by 7° (that's a lot) and eccentric to boot. Many a Kerbonaut has rejoiced at a cheap transfer only to find, upon arrival, that the capture at Moho would require ludicrous amounts of Δv.

Every year, Day 83 is Leave for Moho Day: Transfer time less than one Kerbin year, at a cost of 4600m/s or less.

For best results, you want to do your departure burn Moho on day 82, 5 hours. Being off by an hour or two hardly matters, but don't make it days. If there's things you need to do in orbit before you can depart (perhaps periapsis kicks?), you need to set a launch date accordingly.

Optional: You can save a little Δv if you launch your vessel into a inclined orbit about Kerbin: On day 82, take off at local noon (watch your shadow) going a little south, heading about 110-115 degrees. For those who play by numbers: you want a Kerbin orbit of approx. 15-16° inclination with a LAN of about 230 degrees.

Depart from Kerbin so that a) you closely match inclination with Moho, and b) your periapsis around the sun about touches Moho's orbit (that's a PE of just a little over 4,000,000,000m). If you start from an 85km equatorial orbit, that maneuver will require about 1980m/s prograde and -1200m/s normal, for a total of 2300m/s. If you're already on an inclined orbit, the burn will be about 2150m/s prograde. 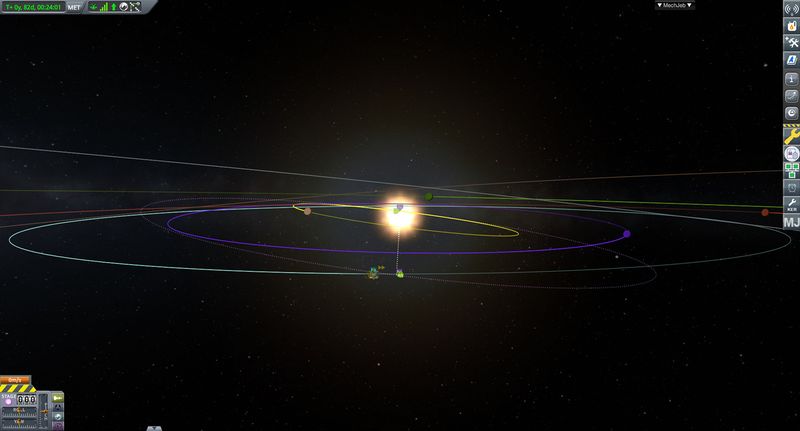 Now plan a maneuver near (usually not exactly at) your PE around the sun, so that you encounter Moho the next time you come around. Effectively you are treating this as a rendezvous. If you're lucky and don't need to make a large burn at PE (or if you're simply patient and willing to wait several orbits), the whole transfer from LKO to LMO can cost under 4km/s. If you need to force it with a large maneuver while orbiting the sun, the total cost may be up to 4500-4600m/s at worst.