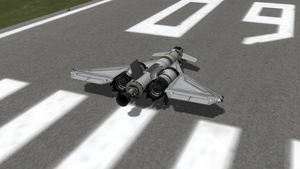 The Aeris 4A ready to start

This is an outline for a typical mission with an Aeris 4A a SSTO.

You can now do an EVA or attempt to rendezvous and dock with another craft in orbit, but try not to use too much liquid fuel, as you will need some left for deorbiting.

You do not necessarily need to land on the runway. Try it when you want to show off, but landing on the flat plain around the KSC is much easier.