Of course, rockets are the fastest way to get from A to B. So if you're serious about exploring biomes, this is what you need. Of course rockets can crash too, but you're used to that by now, aren't you? 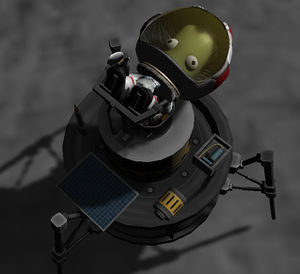 Of course you're free to design your hopper craft as you like. However you should remember the following points:

What good is an exploration vehicle if you can't refuel it? Carrying the fuel for numerous planned hops for every site is pretty wasteful after all.

For horizontal docking, you'll need to align both vehicles perfectly, while the dockings port are moved up or down by the landing strut suspension. The magnetic pull that works well is space just isn't strong enough against gravity to make the docking work.

If your target is on the other side of the moon or planet (i.e. more than 90° away), it is generally better (fuel economy wise) to just go to a low orbit and deorbit to land where you want, as long as you perform a decent gravity turn. Because there's no atmosphere here, you should start that turn immediately after take-off with as low a pitch angle as supported by your TWR. Just don't hit any mountains.

However, here's some hints how to save fuel to have enough for more hops: