The six moon landings of the Apollo program were the first and only landings of humans on another celestial body in history. It was maybe the biggest engineering projects in world history. Over 400,000 people took part in it and the overall cost is estimated to be over 25 billion US$ (corrected for inflation this would be 120 billion US$ today). Many consider it not just the pinnacle of human spaceflight but the overall pinnacle of human evolution, as it has shown that we are technologically capable to leave our planet and migrate to another. Sadly, no human spaceflight beyond earth orbit has taken place for over 40 years now.

For an up-to-date video tutorial on recreating Apollo 11, click here.

For this mission we will recreate the largest and most powerful rocket ever built: The Saturn V. If you are using KSP 0.20 or before, this time we will use the whole height limit KSP has to offer - It will be so large that it nears the ceiling of the vehicle assembly building. In later versions this will not happen.

In older versions, there was almost no room left for the last five engines, which clipped through the floor of the VAB. IF you experience this, do not worry. When you put the rocket on the launchpad, they will be above ground. 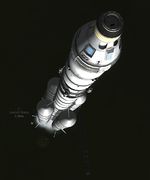 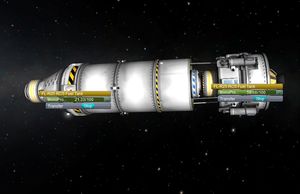 During the real Apollo missions the crew could board the landing module through the docking hatch. With version 0.25 of KSP you can transfer crew by clicking on the crew hatch and then clicking the crew capable module you want to transfer to, in this case, the lander. Transfer the first two brave kerbonauts over. The third one stays behind in the CSM to control it while in Mün orbit and when redocking the CSM.

Get into an orbit with a height of about 20 km around the Mün. Make it as circular as possible. This will make the later redocking easier.

Congratulations, the eagle has landed. 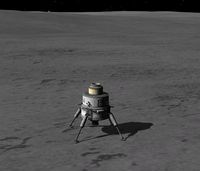 Now get your Kerbonaut out of your lander can, say something quotable about small steps and giant leaps, and jump to the ground. Plant your flag, take some screenshots and videos for future generations, and make sure they are labelled properly, so nobody tapes them over like it happened at a certain other space administration.[1] 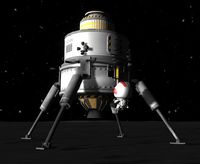 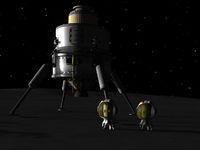 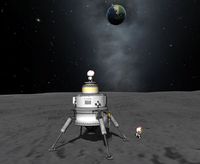 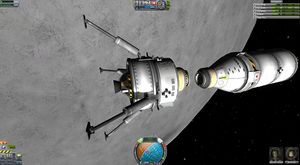 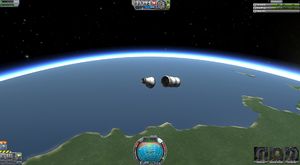 Get the two kerbonauts from the lander back into the command module. Then drop the lander. Use the remaining fuel of the CSM to leave the Mün orbit in a direction retrograde to the orbit of Mün around Kerbin. When your orbital direction around Mün is prograde (90°, anticlockwise), accelerate when you are closest to Kerbin. When you are retrograde (270°, clockwise) accelerate when you are facing retrograde relative to Kerbin, but prograde relative to the Mun. Keep accelerating until your trajectory hits Kerbin.

Wait until you are in Kerbin's atmosphere, then drop the service module, activate the parachutes of the command module, and drop gently into the ocean. Mission successful! 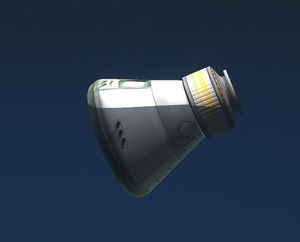 Play the mission normally until after you moved the landing module on top of the command module. Then "accidentally" activate the decoupler between the command and service module. Try to get back to Kerbin with only the CM and LM by using the thrusters and fuel of the LM.