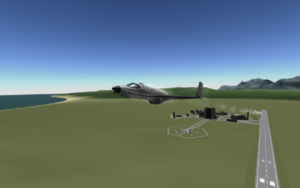 An Aeris 3A takes off from the KSC runway.

Go on, and take the plane capsule which looks like a converted fuel storage device

Any plane needs speed - so you need thrust (usually). To do this, take a few barrels of your jet fuel, stick them on the back of your aircraft. 2 will usually do nicely, but 3 or 4 are usually better (but of course heavier, and this tutorial assumes you use 2). Now stick a jet engine on the back, and don't forget to put an air intake or other air-sucking device (you can find them in aerodynamics) on the airplane. If you forget to put an air intake on your airplane, don't worry! Nothing bad will happen. In fact, nothing will happen at all, and that's probably bad, so put an air intake on your plane anyway.

Before you can make a successful plane, you must understand what makes a plane go in places other than the ground - the wings. In vanilla KSP, wings have a predefined lift factor. Also, lift is usually placed in the middle-to-back of the wing, depending on the shape. Take the large delta wings and place them on the aircraft. Now put on center of mass and center of lift view, and move the delta wings until the center of lift is slightly behind of the center of mass - not in front, otherwise your aircraft will be able to easily flip out of control. This ensures that your aircraft will go up once it achieves a high enough speed, and also helps with placing ailerons.

An aircraft without control surfaces is like a rocket without RCS or reaction wheels - it will hardly turn and will be equally hard to control (perhaps even impossible!). As such, you will need various control surfaces.

Elevators are usually places in the front or back of an aircraft, and their function, as the name implies, is to change the pitch of the nose up and down. They sometimes coincide with ailerons on some, more space-economical, aircraft. There are multiple ways to place them:

Ailerons control the roll of the aircraft, and are (almost) always placed on the wings, as far out as possible and as centered (compared to the center of mass) as could be. They sometimes coincide with elevators. (However, it must be noted that it is bad practice to use ailerons as elevators since it makes it hard to control the aircraft)

The rudder moves the tip of the plane left and right; it is rarely used, since it is hard to put it both up and down due to the possibility of hitting the ground. Also, excessive use of the rudder usually causes the plane to spin out of control and crash. It is usually placed back because it can be placed further back than it is possible in the front (if it is placed in the front, it can obstruct the view of the pilot, which is undesired) as well as making the plane unstable (by the same effect that you would get if the center of lift (horizontal lifting surfaces) were in front of the center of mass, but with vertical surfaces). The rudder is mostly used when landing and when attempting to line up a shot (in a fighter plane)

Congratulations! Your plane is almost finished. All you need to do is add landing gear (one right before the cockpit, and two on the tips or middle of the wings), and you're done!

Hit the launch button and watch your magnificent bird fly! But be careful and don't crash it!