The XM-G50 Radial Air Intake is an air intake for jet engines. It collects more oxygen at higher velocities, simulating more air passing through the intake as the craft velocity increases. However, the XM-50G is effective (compared to the Engine Nacelle or the Mk1 Divertless Supersonic Intake) neither at low speed (outperformed by engine nacelle's static suction) nor at supersonic speeds. However, for low-tech planes that can't find a suitable intake otherwise, it will be mostly sufficient (as in, you won't be going very fast anyway). 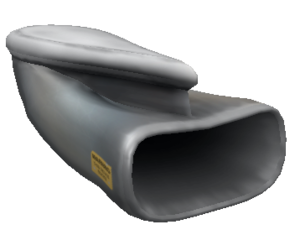