Difference between revisions of "Xenon gas"

Xenon gas is a fuel resource that powers only ion engines. With a density of only 0.1 kg per unit this is the lightest resource after electric charge. 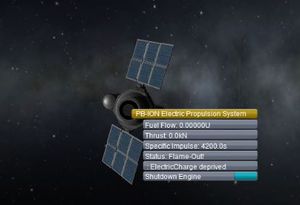 A picture of a flame out resulting of no electric charge

There are only four xenon gas related parts available at the moment. The IX-6315 "Dawn" Electric Propulsion System is an extremely efficient engine which consumes small amounts of xenon gas and a lot of electric charge, and produces just 2 kN of thrust, limiting its uses to small probes or rovers, for the simple reason that burn times would be extremely large in heavier crafts. While in real life the engine usually thrust over long periods of time, it's not possible in KSP to have a craft executing a maneuver in the background when it's farther away than the load distance. The inline PB-X150 Xenon Container, PB-X750 Xenon Container and the radially attached PB-X50R Xenon Container are tanks which can supply the engine with xenon, however additional means of generation and storage are necessary to supply electricity. One should remember to put bring either very large batteries and a slowly replenishing electricity source or a series of large solar panels to help power the xenon engines. In the event that your ion engines stop running and flame out, you should check your electricity supplies as this is usually the problem.

per kilogram, compared to 0.3

per kilogram of monopropellant, and 0.1

per kilogram of liquid fuel + oxidizer in a 0.9:1.1 ratio. While Xenon gas produces 5.25x the amount of thrust per unit weight compared to the LV-N (and nearly 11x the best chemical rocket), it costs over 400x as much per unit weight. Thus in the vast majority of cases, it is not economical to use. The cost of xenon gas makes LV-Ns much more economical for propulsion over clusters of ion engines. The xenon is best used when the Δv requirements are high, and the payload size is small - for example for the probes.

The available xenon containers in table
Retrieved from "https://wiki.kerbalspaceprogram.com/index.php?title=Xenon_gas&oldid=68978"
Categories: