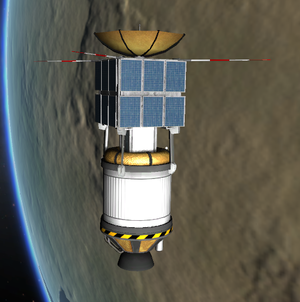 Ракета-носитель "Z-MAP Satellite" (англ. "Z-MAP Satellite Launch Kit") (начиная с версии 0.21 "Z-MAP Satellite") is a stock rocket capable of bringing a small communication satellite into orbit. It consists of four stages with the last stage as the payload. The complete craft has a mass of 20.98 t with 78 parts, including two TT18-A Launch Stability Enhancers.

The launcher has a very high thrust-to-weight ratio of 3.4 with all three engines running at 100% throttle. Because of the high acceleration the terminal velocity is exceeded very fast lowering the efficiency. Another staging order would use only the booster until they run out after 29 seconds and switching to the liquid fuel engine then.

Usually it is possible to reach orbit with the boosters and the first stage. To avoid debris the first stage should be dropped earlier and then finishing orbit with the second stage. This stage has also its own Probodobodyne QBE command module allowing deorbiting this stage after placing the payload in the targeted orbit. 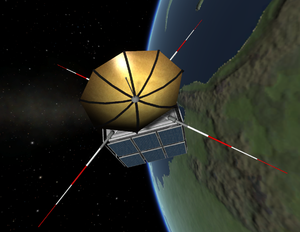 As there is a battery missing the only electronic storage are the 5 E in the command module, which isn't enough to operate the satellite in Kerbin's shadow.

The satellite itself fulfills little purpose. Antennas are only required for sending Science results back ot Kerbin, but the satellite has no science experiments on board.

The launcher can bring other payload into a Kerbin orbit like the Ion-Powered Space Probe. As the thrust-to-weight ratio is very high it is also possible to bring heavier payloads in a low orbit. With the sub-assemblies added in версия 0.22 it is possible to store the launcher and reuse it easily.