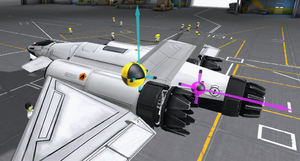 The center of lift (abbreviated COL or CoL) is the point where the sum total of all lift generated by parts — principally by wings, control surfaces, and aerodynamic fuselage parts — balances out and the aggregate direction their force will act on a craft while in an atmosphere.

Along with the center of mass (COM) and center of thrust (COT), it is one of three key physics properties determining a craft's behavior while in motion. Display of the COL can be toggled in the editor where it is seen as a cyan and black checkered sphere with a cyan arrow extending out of it.

Like thrust, lift is a force acting on a craft with its fulcrum at the center of mass. The COL has a vector arrow pointing the direction that lift will push through the COL, and thus which way it will tend to pitch (up or down), yaw (left or right), or even roll (clockwise or counterclockwise). This force becomes stronger the faster the craft goes and thicker the atmosphere is around it.

It can alternatively be understood as the center of drag that forward momentum will try to place behind the COM like the feathers fall behind the head of an arrow in flight.

The center of mass will shift as fuel is consumed or stages detach. This may critically alter the relation between the COM and COL to alter the flight characteristics. It is not possible to see the COM, or the other centers, outside the editor. However, using tweakables in the editor to alter the fuel level or temporarily taking stages off, or both, will alter the position of the COM, and COL if staged parts generate lift. This can reveal issues that would cause nonstandard flight profiles before actually launching.