A contract is a request by an agency to perform a task. Contracts were added in version 0.24 for career mode. The first contracts are predefined[1], but afterwards an infinite supply of random contracts will be generated based on a set of templates.

Accepting a contract is optional - any contract may be ignored without penalty - but taking contracts can lead to lucrative rewards. Contracts can reward science, funds and/or reputation if successful. Failing a contract will cause loss of funds, and possible a loss of reputation if the failure involved the loss of kerbonauts. Multiple contracts can be active at the same time, and each can have its own deadline (or none at all). It's also possible for multiple contracts to be completed by the same craft.[1] Their difficulty ranges from trivial tasks to exceptionally difficult missions.[2]

If you don't like a contract from the outset, you can decline it, by pressing the 'Red X' in the mission details. Doing so incurs the 'Decline' penalty: usually about -1 Reputation.

This can be useful for contracts whose deadline will come before it is possible to complete the contract, or if a more appealing contract appears that will take much longer than the contracts already accepted, such as a contract to explore Jool, which will take several game years.

If you have already accepted a Contract, but don't want to complete it (or if failure is inevitable or if you need that mission slot in the mission control), you can cancel it. Cancelling a contract does not count as failure and will not incur the failure penalty. Instead, when a contract is cancelled, the cash advance and reputation advance are taken back as well as a small reputation penalty. Note that the advance is affected by your Strategies, but the refund is not.

So rather than having to launch multiple missions to finish up active contracts first, before launching a long-term exploration vessel (which might take several real life hours or days), contracts which will expire before the vessel is due back may be cancelled for a minimal penalty. The funds given as an advance will be lost, but this is a small price to pay compared to contract failure, and results in having the same level of funds as before the contracts were accepted. It can also be used to "borrow" money for space center upgrades or expensive launches before completing other contracts.

As of version 1.3[outdated], there are several types of contracts.

These contracts require that an asteroid needs to be captured and moved to a particular location, be it a planet, moon, orbit, or even an escape trajectory from the solar system. Sometimes the contract requires the player to land the asteroid on Kerbin.

These contracts require a kerbonaut to plant a flag on a moon or planet. Although the flavor text of these contracts mentions that the client would like to see their flag on the surface, it doesn't matter which insignia the player picks for the mission.

These contracts ask for a specific amount of resource (thus far exclusively ore) to be extracted from the surface of the given celestial body. The contract also often demands the transportation of the ore somewhere else.

These contracts require the player to land on some body with an engineer and a command pod to remotely attach to a pre-built rover that spawns in an inoperative way, usually with the brakes locked. The player will have to add the command pod and move the rover to a nearby way-point.

The first contracts are provided by the Kerbin World-Firsts Record-Keeping Society and guide the players to their first successful orbit by posing smaller, interactive challenges such as breaking records of speed, altitude, and distance. Later on, other agencies offer contracts that are bound to the player's progression such as the first flying-by, orbiting, and landing on celestial bodies. These contracts are the same for every player and are not procedurally generated. They can thus be seen as the story line of the career. They have in common that they do not have a deadline once they are accepted but they are not offered indefinitely and can thus expire. See also List of story line contracts. 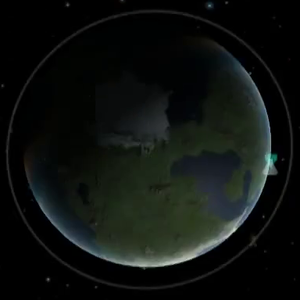 These contracts ask that an unfortunate kerbonaut needs to be retrieved, brought down to the surface, and safely recovered. Accepting a rescue contract will spawn a new kerbonaut in a low orbit around Kerbin, or somewhere else, who will be visible in the Tracking Station and map view. Kerbals spawned by rescue contracts can't be controlled until the rescue craft is within 2.25 km of the derelict; once a craft has maneuvered close enough the [ or ] keys will switch control over to the victim. [3] After that, the victim can EVA and use their built-in RCS jetpack to travel to, and board, the rescue craft.

Once the Kerbal has been rescued, he will be added to the crew roster in the Astronaut Complex. For this reason, rescue contracts are often desirable in mid-late game, as the cost of hiring new kerbonauts at the Astronaut complex rises quickly the more Kerbals are hired, but long missions (and/or the loss of Kerbals to catastrophe) will require ever more Kerbals. It is often the case that the launch and recovery of a rescue mission will cost fewer funds than simply hiring a new Kerbal. Additionally, rescued kerbonauts will still join the roster even if the maximum roster limit is reached. If the Kerbal is killed the contract is considered failed and the penalty will be assessed.

These contracts require you to collect parts which have been stranded in orbit and return them to Kerbin.

These contracts require the player to place a powered probe core with an antenna (artificial satellite) in a specific orbit around a celestial body, and meet a variety of often very specific requirements:

As of version version 1.2, these contracts can also require the player to create a network of minimum 3 satellites around a celestial body.

These contracts require the player to rendezvous with a pre-built satellite and attach a requested part using an engineer in EVA.

These contracts requires the player to reposition an already existing satellite in a specific orbit. The contract also assigns the specific satellite that can fulfill the contract. (Yep, avoid name duplication!)

These contracts require that scientific data needs to be gathered in a specific location, for example, orbiting the Mun. This may be done by either transmitting the data with an antenna or returning the craft to Kerbin and recovering it. These contracts usually reward quite a large sum of funds, but a negligible amount of additional science. Stationing a satellite equipped with a repeatable experiment like a 2HOT Thermometer and an antenna in orbit is a great way to fulfill these contracts several times making them a quick and easy source of funds.

These contracts requires the player to use the SENTINEL Infrared Telescope to scan for asteroids while orbiting a celestial body that isn't the Sun.

These contracts require that a Kerbal conducts an experiment in a specific location. This report needs to be taken, not returned, in order to count for the contract. Some of the locations require the Kerbal to be in flight above or below a certain altitude and others that the craft be landed. The game will display a message when the craft enters the specified location, and the locations can be navigated to using the map view and navball. Several contracts combine multiple experiments in different locations into one multi-part contract.

As with "science contracts", it doesn't matter if the player already has completed an experiment from that specific situation and no science needs to be earned, so long as the craft is in the correct location.

These contracts involve transporting a certain part to a certain situation and either activating it or running a test on it. Contracts usually specify conditions under which the part must be tested, for example, it may need to be tested when the craft has landed on a certain body, or is in the water on Kerbin, or is at a certain altitude and speed. If the player has not unlocked the required part, it will still be available in the VAB/SPH until the contract has been completed or failed. The item will be marked with **EXPERIMENTAL** during this period, and will not require an Entry Cost. Once such a contract is completed, any saved vessels that had used the experimental part will be flagged as containing illegal or locked parts, and the vessel cannot be launched until the part is removed or researched (or becomes valid under a new contract).

These contracts are very similar to "part testing" contracts, but these contracts don't need the testing phase after the part is transported to a certain situation.

These contracts require transporting some tourists to a given location and returning them to Kerbin. Note that some tourists in a single contract can have different touring targets, and may additionally need a pilot on board for flight control. Although these contracts give decent financial profit, and improve reputation, there are never scientific benefits. The contract fails if the tourists die or rendered unconscious by high gee forces, and of course there are fame and financial penalties.

These rare contracts are an other kind of tourist entertainment, for funds (

) and reputation (★) only. Some extremist tourist aren't interested in reaching way-points that the Kerbol system can offer, only high gee forces rendering them unconscious. And yes, they still want to survive the tour too...