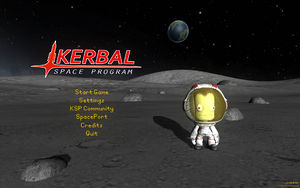 Kerbal Space Program (commonly KSP) is a space flight simulator game in which the player directs a space program run by the Kerbals, a cartoonish race of little green humanoids. Their space program operates from the Kerbal Space Center (KSC) on the planet Kerbin, sending craft out into a scaled-down analogue of the real-life solar system (though with significant differences). KSP suggests various goals in the form of contracts, but the sandbox nature of the game allows players to set and attain their own goals in variously “Kerbal” ways (read: ridiculously impractical and/or catastrophe-prone).

Play centers on building and piloting craft. In the editor, parts can be combined in many ways, resulting in craft possessing various operational capabilities. Players then launch and pilot them across terrestrial surfaces, through atmospheres, and — most of all — in orbital transfers between the celestial bodies of what is unofficially called the Kerbol System.

There are different game modes. In most of them the player can perform Science! And in full Career mode, players make decisions about various administrative aspects of the Kerbal Space Program while juggling program resources such as funds and reputation, and unlocking parts.