Kerbin is the home planet of the Kerbals, the location of the Space Center and other facilities, and the main focus of Kerbal Space Program. It is also the Earth analog for the game but, unlike Earth, it has two moons instead of one. They are named Mun and Minmus.

Reaching a stable orbit around Kerbin is one of the first milestones a player might achieve in the game. With the introduction of version 1.0.3, attaining low Kerbin orbit requires a Δv of approximately 3400 m/s (vacuum), though the exact amount depends on the efficiency of the ascent profile and the aerodynamics of the launch vehicle and payload. The only rocky planet that requires a higher Δv to attain orbit is Eve. Many interplanetary missions expend over half of their Δv in reaching Kerbin orbit. The velocity required to escape a body from a given altitude is always exactly the square root of two times the velocity of a circular orbit around the body at that height:

Topographical representation of Kerbin's surface as of 0.18.2. Click for high resolution. by Zeroignite 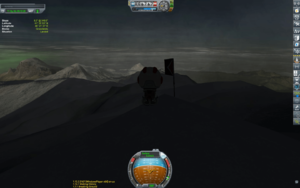 Kerbin has a roughly equal distribution of liquid surface water and solid land, with polar ice caps and scattered deserts. Some of its mountains exceed 6 kilometers in height, with the tallest peak being 6767.4 m in altitude at the coordinates 46°21'32" E 61°35'53" N. The lowest point is almost 1.4 km deep and about 313° south-west of the Kerbal Space Center.

Unlike other bodies in its system, Kerbin has few visible craters because its environment would erode craters from the few meteors that avoid the gravity or surface of its large moon and survive entry. Nevertheless, some geological formations indicate that bodies have violently collided with Kerbin: a planetary feature appears to be an impact crater, while a secondary rupture lies on the other side of the planet (made by the intense longitudinal, or P-wave earthquakes that ensue.) Both are in excess of 100 km diameter, and the main crater lies along the far-western coastline. The uplift is easily visible as a series of islands, and the feature has a central peak that pokes up through the water (also known as a rebound peak.) The other, and smaller of the two, is near the prime meridian in the northern hemisphere and is more easily missed, but its uplift rims are visible, and it also has a central rebound peak.

After the Mun, Kerbin is the celestial body with the second-highest number of biomes. Science experiments can be performed in all biomes, though Kerbin's low multipliers result in less impressive results than more distant worlds. Kerbin's biomes show a loose correlation with Earth's biomes and geographic features. Uniquely, Kerbin has 33 location biomes at KSC, these are comprised of each building and their props, the crawlerway, the flag, and KSC itself; these give a jumpstart to gathering Science points in Career mode. With 1.2 Kerbin had distinct Northern and Southern Ice Shelves added.

Temperature and pressure of Kerbin's atmosphere as a function of altitude.

Kerbin has a thick, warm atmosphere with a mass of approximately 4.7×1016 kilograms, a sea level pressure of 101.325 kilopascals (1 atmosphere), and a depth of 70,000 meters. The atmosphere contains oxygen and can support combustion. Kerbin is one of the two celestial bodies (the other one being Laythe) with a breathable atmosphere.

The average molecular weight of Kerbin air is 28.9644 g/mol, and its adiabatic index is 1.40. This suggests that Kerbin likely has an earthlike nitrogen-oxygen atmosphere. The air-fuel ratio of jet engines operating in Kerbin's atmosphere suggests that the percentage of oxygen is similar to that of Earth's atmosphere (about 21%).

Kerbin's atmosphere can be divided into three major layers, comparable to Earth's troposphere, stratosphere and mesosphere. In the lower and upper layers, temperature decreases as altitude increases, while the middle layer spans of a region of increasing temperature. The boundary between the lower and middle layers occurs at an altitude of about 16 km at low latitudes, and about 9 km at high latitudes. The boundary between the middle and upper layer occurs at an altitude of about 38 km.

The atmosphere of Kerbin is patterned after Earth's U.S. Standard Atmosphere (USSA), though with the vertical height scale reduced by 20%. Kerbin's "base" temperature and atmospheric pressure can be very closely approximated using the equations of the USSA, where Kerbin's geometric altitude, z, is converted to Earth's geopotential altitude, h, using the equation:

The thickness of Kerbin's atmosphere makes it well suited for aerobraking from a high-speed interplanetary intercept. The periapsis altitude required for a successful aerocapture depends on the spacecraft's drag characteristics, its approach velocity, and the desired apoapsis of the resulting orbit. For most conditions, a periapsis altitude of about 30 km should result in an aerocapture.

Parachutes perform well in Kerbin's dense air, allowing landings on both land and water to be accomplished without the aid of propulsion.

A modified Orbiter 1A prepares to dock with a space station.

A synchronous orbit is achieved with a semi-major axis of 3 463.33 km. Kerbisynchronous Equatorial Orbit (KEO) (or geostationary), has a circularly uniform altitude of 2 863.33 km and a speed of 1 009.81 m/s. From a 70 km low equatorial orbit, the periapsis maneuver requires 676.5 m/s and the apoapsis maneuver requires 434.9 m/s. A synchronous Tundra orbit with eccentricity of 0.2864 and inclination of 63 degrees is achieved at 3799.7/1937.7 km. Inclination correlates with eccentricity: higher inclined orbits need to be more eccentric, while equatorial orbit may be circular, essentially KEO.

The Hill sphere (the radius around the planet at which moons are gravitationally stable) of Kerbin is 136 185 km, or roughly 227 Kerbin radii.

From the lowest possible stable orbit around Kerbin (70 km), the nominal amount of delta-V needed to reach other destinations is:

Kerbin has approximately 1/113the the mass and a 1/10the the radius of Earth.