From Kerbal Space Program Wiki
Jump to: navigation, search
For the species of Kerbin, see Kerbal. 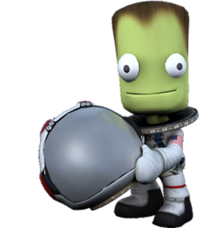 Kerbonauts can be directly controlled when on EVA, where they wear a spacesuit and can collect EVA reports and surface samples. The spacesuit includes an RCS jetpack, which allows tri-axial maneuvering while in space, and flight on planets with low gravity. Kerbonauts on EVA can be killed by hitting objects at a high velocity.[2]. As of 1.6 Kerbals may now remove helmets and neck rings on planets with a breathable atmosphere though by doing so the Kerbal will be more susceptible to damage and will also die if oxygen is deprived. In addition, even when the 'Ignore Max Temperature' cheat is enabled, removing a Kerbonaut's helmet, while they are in the immediate vicinity of the blast of any engine that produces significant heat (most often rocket engines), will near-instantly kill them; that is, assuming that they are also in an EAS-1 External Command Seat with the 'Unbreakable Joints' cheat enabled as well. If not, they will probably be thrown out of the blast zone by the engine itself before they die. 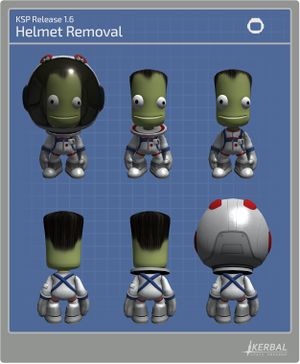 Any kerbal can store experiments while in EVA. The two only restrictions are that only a scientist can perform experiments during an EVA (and reset modules such as the mystery goo and the science Jr.), and a kerbal cannot store twice the same experiment/situation/biome triplet.

The science is transfered to any command pod they enter, so don't forget to right-click on a command pod to retrieve stored expriments when going to EVA to another ship for example.

Experiments in version 0.23 using non-badass kerbonauts modified to the four possible combinations of extreme Courage and Stupidity ([1, 1], [1, 0], [0, 0], [0, 1]) revealed that Courage does not control fearful behavior. Both of the Stupid kerbonauts were blissfully ignorant in the face of danger. Meanwhile, the non-Stupid ones both displayed equal fear of accelerating in any rocket built by KSC engineers, and displayed this at exactly the same time despite having opposite levels of Courage from each other. Subsequent tests with 0.75/0.25 combinations showed an uptick in fear in the less Stupid subjects, indicating that the natural outcome of awareness is dread.

However, observing the behavior of tourists (during the cash runs to Mun, for example) have generated the result: At Kerbin (inside atmosphere, around KSC), those with low stupidity tend to show more fear. However, once they reached a certain altitude (or distance to KSP), their mood (behavior) quickly switched to "content", and are all "excited" when in space (including landed on airless bodies like the Mun). However, regardless of that, all kerbonauts display fear toward explosions, even if it was caused by jettisoned parts. (tested in version 1.10.1)

Curiously, my engineer (who had low stupidity) was frowning when taking off in a spaceplane (at KSC). Once it was out of its influence he too become "content", even when doing extreme maneuvers (+15 gee turns).