The LT-05 Micro Landing Strut is the smallest and lightest landing leg, providing a low mass option for small crewed spacecraft and probes. 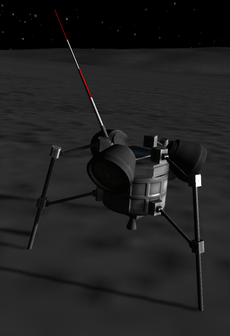 LT-5s sunken into the terrain on a small munar probe

The LT-05 can be extended with the G key similarly to the LT-1 and LT-2. Each LT-05 can just barely handle a 4 ton load in Kerbin's gravity, when standing still -- or about a half a ton per leg when absorbing a gentle landing impact.

These legs do not extend very far at all, either vertically or horizontally. This means the vessel may tip over a lot more easily when landing. Be careful that it lands vertically on even ground, and attach the legs as far apart as possible on the craft.

With normal placement, the legs extend downward just far enough to protect an LV-909 "Terrier", Rockomax "Spark" 48-7S or LV-1 "Ant", but only when attached as low as possible. You can use the offset feature to gain an additional meter or so.