As a liquid fuel engine, the Reliant has throttle control, shutdown and restart capabilities, making it easier to control vehicles safely and accurately. It also has nearly twice the specific impulse of the solid motors that went before it. It cannot be placed radially; however, since rocket fuel tanks can be placed radially, the Reliant can be the basis of liquid-fueled strap-on boosters in parallel configurations. Since the engine lacks thrust vector control, other means must be incorporated to make sure the vehicle remains pointed in the right direction, such as parts with reaction wheels, aerodynamic fins and control surfaces, and parallel operating gimbaled engines such as the LV-T45 "Swivel" Liquid Fuel Engine.

The Reliant has the highest Thrust to Cost ratio of any liquid fueled engine in the game, meaning it produces a kN of thrust most cheaply. This makes it one of the most cost-effective engines in career, although compensating for the lack of gimballing may cause the final rocket to be more expensive. 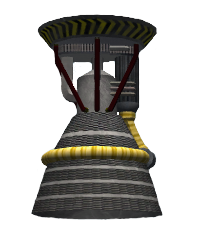