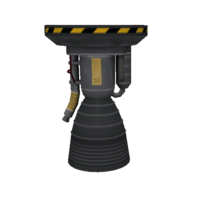 Staying relevant to KSP, we separate out air-breathing jet engines which can only operate inside an oxygen-rich atmosphere from those able to operate in space. All use the same resources and are controlled the same way.

All KSP's other reaction engines can operate using only resources stored or generated onboard and are collectively called rocket engines. There are many types of rocket engines. They differ by the kind of fuel they use and the controls used to operate them in-game.