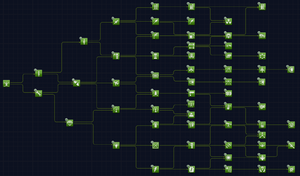 The tree is accessible via the Kerbal Space Center Research and Development Facility's “Technology” tab. As part of the Science system, the Technology tree is not available in Sandbox Mode; instead all parts are automatically unlocked. All other modes begin with the initial node “Start” unlocked. Each node beyond it has a prerequisite node or nodes which must be unlocked before it can be researched. Unlocking the entire tree requires 18 468 Science including the hidden nodes, but 16 918 without. Before difficulty modifiers, there are 392 019.3 Science points available from experiments, and 6 055.8 from recovered vessels.

Most research nodes have dependencies upon earlier, lower technology nodes. For example, the General Rocketry node requires that the Basic Rocketry node is unlocked before the player may spend 20 Science points to unlock its parts. Some nodes have multiple dependencies that require several nodes to be unlocked before they become available. There are also research nodes that have multiple dependencies, but most only require one of them to be unlocked prior to becoming available. Within the stock tech tree, Nuclear Propulsion and Ion propulsion are the only nodes that require all dependencies.

In Career Mode there is also a further restriction depending on the level of the research facility. The starting building allows only nodes under 100 Science points, the mediocre allows up to 500 Science points, and the final facility has no limits. (These restrictions can be put into Science Mode by editing the save file to reduce the building level)